Fall and Beer Go Together in Gunnison & Crested Butte

If you’re planning a visit to the Gunnison & Crested Butte area this fall, be sure to include beer in your itinerary. Fall and beer seem to go hand in hand in this valley. The big crowds are gone in September and October. Time seems to slow down. If you are a fan of craft beer, this would be a great time to come for a visit and grab some outstanding beer.  Three Rivers Resort in Almont is a great midway point between Gunnison and Crested Butte to quench your thirst.  With the free valley bus running on its Fall Bus Schedule, you don’t have to drive anywhere. The Castles near Gunnison, CO Gunnison has a fantastic brewery called High Alpine Brewing Company  ranked 14th in Colorado breweries on “Untapped”.  This place is the real deal – brewing their own beer as well as serving up a variety of other craft beers. The menu includes creative and tasty concoctions such as the Curecanti Chile Beer made from locally sourced Paonia chiles.  It has just the right amount of kick.  If you are a hophead, like me, you’ll love the Green Gate IPA and the Slash Turn NE IPA.  High Alpine keeps it interesting by offering all sorts of seasonal beer.  It’s Beer Heaven!  And don’t forget to have some pizza.  It’s fantastic!

The Dive just recently opened and serves some really creative dishes plus some of the old stand-by’s.  Additionally, their beer selections rotate and include Colorado brands like New Belgium, Odell’s, and their own special brew too.  Be sure to check out their amazing whiskey cocktails as well! From Gunnison, catch the bus back up to Almont and stop to grab a brew or two at Three Rivers Smokehouse before it closes on September 30th. Their bar selection includes local tap beer from Crested Butte’s Irwin Brewing and other Colorado beer companies.

The Almont Bar and Lounge  sits across Highway 135 from Three Rivers Resort (and Three Rivers Smokehouse). You are sure to catch some of the locals here! They’re a hoot! The bar serves up a variety of tap and bottled beer. They typically serve a tasty food menu until 9 pm and the bar stays open late.  You can walk back to your cabin at Three Rivers Resort for a good night’s sleep before you head up hill to Crested Butte for the next day of Beertopia!

Don’t miss the Annual Chili & Beer Festival. This year it takes place on September 8th from 12pm to 4pm at the base of the Crested Butte Mountain Resort ski area.  Beer, music, and chili: it doesn’t get any better! Brewers from all over Colorado will set up a tasting tent here. They may include: Steamworks from Durango, Telluride Brewing Co, Alpine Dog from Denver, Kannah Creek from Grand Junction, High Alpine from Gunnison, Vail Brewing, and Big B’s from Hotchkiss.  You can also buy tickets for just the Chili tasting if you’re not into the beer scene.

If you miss the Chili & Beer Festival in September, there are still many places in Crested Butte to grab some amazing beer and see the local wildlife otherwise known as “Buttians!” For a designated driver, use the free Mountain Express Shuttle. It will take you through the towns of Crested Butte and Mt. Crested Butte (where the ski area sits), to make getting around a breeze. For the locals’ favorites, try Kochevar’s bar along with their long and haunted history or The Eldo.  The Eldo won “Best Lager” in the 2015 Beer and Chili Festival. It’s great for some live music as well. For the ultimate beer selection, head over to the Brick Oven Pizza patio. Not only is it the largest outdoor patio in town, they serve up over 30 beers on tap, covering all of the major Colorado brews. The rotating selection includes unfiltered, unpasteurized cask beer as well.

When you’re ready for a beer break, check out the unbelievable cocktails at The Dogwood. It is a hidden gem! Also, try Montanya  Distllers.  The Rum is distilled on site and you can take a tour of the distillery.  The seasonal “Bloody Pirate” is one of my favorites. 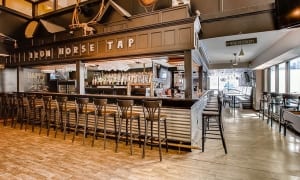 Head back up to Mt. Crested Butte and hit one of my favorite little local spots for a cold beer.  Iron Horse Tap has a great selection of beer and is located in The Plaza hotel/condominium complex. I love to hang out here with friends and catch up after work.  Their food is fantastic as well.

Finally, circling back to the base of the ski area, you’ll find another local favorite watering hole, the Avalanche Bar & Grill.  They serve up great, affordable food along with Colorado beers such as Odell, New Belgium and Avery. Hit up Butte 66 for a drink on their 2nd floor patio with the best view of the mountain. Watch mountain bikers bomb down the hill (or skiers in winter) or take a scenic chairlift ride afterwards. 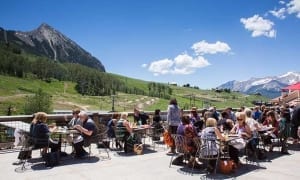 I hope to see you out and about having a cold one with friends this fall! Cheers!

Christy Miller is the Assistant Resort Manager at Three Rivers Resort in Almont, Colorado. She lives in Mt. Crested Butte near the Crested Butte Mountain Resort ski area. Three Rivers Resort is the perfect basecamp for a valley-wide beer tour, offering a variety of cabins, vacation homes, RV sites and lodge rooms. Rafting and fishing trips are offered from the resort throughout September. Stop by Three Rivers Smokehouse restaurant through September for homemade BBQ, burgers, salads and a cold beer!